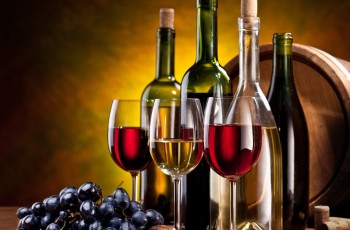 Our wine list is carefully selected from local wineries with worldwide discriminations. Our main supplier is Monemvasia winery Tsimbidis.

The vineyards of Peloponnese

The vineyards of the Peloponnese are concentrated mainly on hilly and mountainous areas, either in complex terrain, or plains and valleys between the mountains. The Peloponnese vineyards are shared into two main areas. One consists of the eastern and central part with key areas Nemea and Mantinia and the other on the west side, starting from the north and on the slopes of Mount Panachaiko, near Egion and Patras, and follows the coast of the Ionian Sea, stretching down to Messinia. Its main vine growing areas are Achaia in the north and Ilia and Messinia in the south. The vineyards of the Peloponnese have a mild Mediterranean climate, which is formed by the favorable effect of the sea breeze of the Gulf of Corinth and, the cold air provided by mountain ranges of Central Greece and central Peloponnese.

A Historic retrospection of the wine.

Grape vine is a self-sown plant in Greece, whose traces are found in the period prior to the Ice Age. Viticulture and winemaking in Greece are given human activities since the Prehistoric times. Many traces of wild grape vine have been found in various areas of the country (Thrace, Macedonia, Thessaly, Evia, Peloponnese), with some dating prior to the Neolithic Age. The cultivation of the domesticated grape vine begins in Greece, in several areas, during the 4th millennium BC.

In the Archaic period, during the 7th century BC, cultivation of the grape vine has been spread widely in Greece. Accordingly, old and new winemaking techniques have been spread, such as the sun-drying of the grapes and the addition of various plants, herbs, honey and resin to preserve or to flavor the wine. Alongside, the worship of god Dionysus is spreading and through the Dionysian festivals, we see drama, tragedy and dramatic poetry growing.

The Classical period is characterized by the “Golden Age” of Athens of Pericles (5th century BC), a period synonymous with perfection and timelessness, the birth of democracy and philosophy, the construction of the Parthenon, the era of the big philosophers and the great classical authors. Similarly, this is a great period for the famous Greek wines of antiquity too, which enjoyed a tremendous boom through international trade. A major characteristic of the Classical period, regarding wine, is the foundation of the basis of modern wine culture and law, as expressed nowadays with the designation of origin, the protection of winemaking, the specific wine terminology, wine tasting, sommeliers and wine critics. The inclusion of wine in daily life and social interaction, through the Attica’s symposia, was a catalytic factor for all these. At that time, wine played a significant role and contributed to Greek philosophy, as we know it through the works of Socrates, Plato and many other philosophers.

The “Hellenistic times” is the most glorious era for Greece and the Greek wines. Through the campaign of Alexander the Great, Greek culture reached Egypt and even India and, carried the Greek grape vine to the depths of Asia. Winemaking was noticeably flourishing at that time, in order to meet the needs of the sizeable army of Alexander, which was not only used as a tonic and refreshing, but also as “sterilizing” to cope with the hardship of the campaign. The Macedonian ships were transporting wine from the Greek islands of the southern Aegean such as Rhodes, Kos, Cyprus, and the coast of Asia Minor, to the ports that the army has reached.

In the last decades of the 20th century, in the Greek market, we have the establishment of small and medium-sized local wine producers with a limited production, who use Greek and international grape varieties. Winemakers and oenologists who have studies mainly in France and other European countries, but also graduates of Greek university specialized in Viticulture and Oenology, give a new impetus in the production and utilization of the unique Greek varieties, through the use of modern technology and vinification methods . During the same period the organization of the Greek Wine Fair “Oenorama” and “Dionysia” begins, as well as the Thessaloniki International Wine Competition. This period is the starting point of the rediscovery of Greek wine by Greeks and foreigners from around the world, while the distinctions of Greek wines are now not only continuous but also global.